View all our Posts on East Vancouver Neighbourhoods!

East Vancouver is a large subsection in Vancouver, and has many smaller neighbourhoods within each area. Riley Park is one of these neighbourhoods. From 41st Ave to 16th Ave, and about Cambie St to Fraser St, “Riley Park – Little Mountain” has a lot going for it. With two of our WeLoveEastVan Team members living in the neighbourhood, we know this from first hand experience. You might know this area as the neighbourhood with the giant ceramic poodle on a pole (at Main and East 18th). 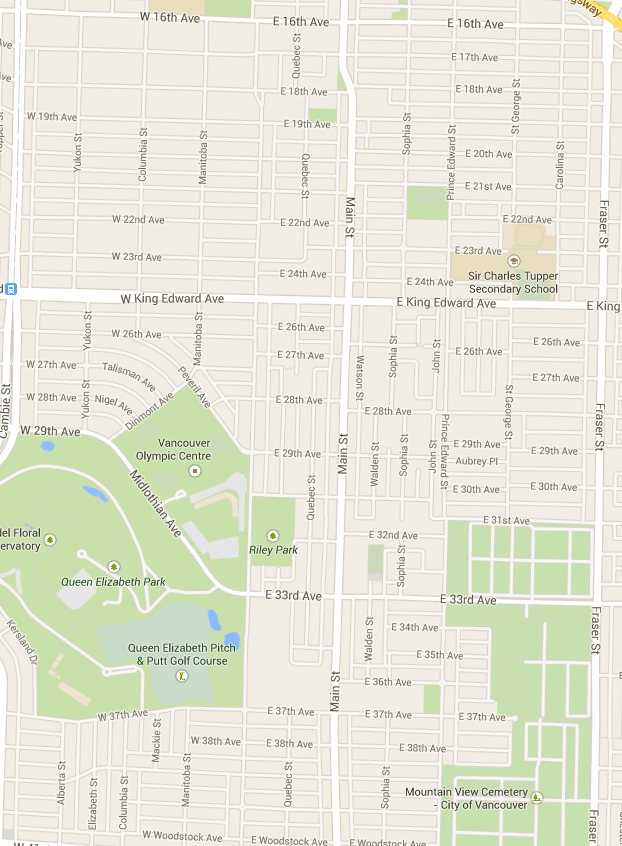 For more information about Riley Park, see the City of Vancouver’s dedicated Riley Park site including initiatives and news. We’ll help you with the real estate.

Main St and Fraser St (and Cambie on the West side) are the main roads in the neighbourhood, with most of the shops and amenities. Main St south of 16th has everything from great restaurants and bars, to local shops, to unique stores, to everything you probably need. Fraser St is constantly evolving and is becoming a destination for new restaurants thanks to some new condo buildings going up in the neighbourhood and people moving further east.

Riley Park – Little Mountain (in the Main Real Estate District in Vancouver) has a great mix of real estate in the neighbourhood, with a mix of detached houses, older condo buildings and townhouses and some recent developments in as well. Detached homes close to Main, and closer to downtown are still the most desired (as long as they aren’t on a busy street or in the Fraser Bog (soft land found in certain areas between 16th and 30th, east of Fraser). This area doesn’t have strict zoning when it comes to the look of new developments, so you’ll see a mix of some older homes that have been re-furbished, Vancouver Specials and modern homes and townhouse developments. This area is home to a number of newer townhouse complexes that offer larger, 3 bedroom homes. In terms of condos, Main St and Fraser St have a number of condo buildings above commercial retail and in the side streets, including new buildings like 3333 Main, The Riley (on Main and 30th) and Magnolia on King Edward (at Fraser).

The area is growing in popularity thanks to the amenities in the neighbourhood and the easy transit access to downtown (and if you head over to Cambie, you have the Canada Line). It’s also very popular with families thanks to the number of detached houses, large townhouse complexes and parks nearby.

I’m going to highlight some of the my favourite places to go, but this is by no means an exhaustive list. Let us know if you have any questions:

Earnest Ice Cream at 3992 Fraser St (at East 24th) – Right next to Graze (and providing Graze with a vegan Ice cream they use in desserts, this shop has people coming over the Fraser from across the city. Pick up a cone or a take home a jar. They’re always adding new flavours.

The Fish Counter at 3825 Main St (at East 23rd) – This store knows their stuff when it comes to Seafood. And if you’re hungry, get their Fish & Chips – classic and delicious, though they also have some soups and other seafood dishes like tacos and po’boys.

The Vancouver Farmer’s Market at 4601 Ontario St, near Queen Elizabeth Park – This is the only farmer’s market in the city that’s open year round, on Saturdays. Enjoy the bounty, which features food, food trucks, musicians, breads, baked goods and crafts.

Riley Park is home to some great, local shops including Barefoot Contessa, Lut Boutique, Front and Company, Vancouver Special, Strategies Hobbies and Games (for Games nights!), Hazel and Jools, and Trendybucks (the everything store – if you’re looking for something random, I bet this place has it).

Hillcrest Community Centre – One of the biggest and best Community Centres in Vancouver, with new large facilities and programs for kids and adults, featuring an aquatic centre, ice rink and community centre. It’s also right next to Nat Bailey Stadium which is always fun for a night out in the Summer to catch a Vancouver Canadians Game. 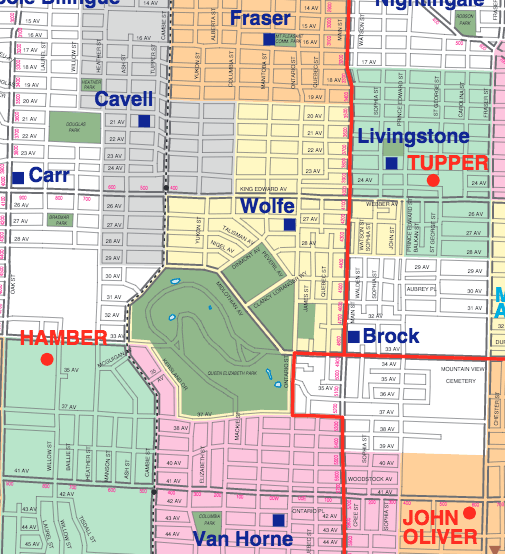 Renfrew Real Estate Scroll down to see all current condos, townhomes and houses for sale in Renfr...